November has caused me a level of  anxiety akin to that of stage fright combined with first-date jitters. Not only is my first wedding anniversary less than 3 weeks away (with a trip to Vegas pretty much right after our pumpkin cheesecake), but the proverbial baton has been passed and I am now officially in charge of hosting the family Thanksgiving dinner at my (very small and hardly adequate) home.

In traditional Cuban-girl fashion, I have already panicked and read at least 2 Williams-Sonoma Thanksgiving cookbooks. This, of course, was followed by yesterday’s impromptu trip to Ikea, mecca of all things cheap, chic, and Swedish. Phase one of my prep time turned into a living room makeover for under $130 (pics below – we basically bought a large mirror and small side table and moved things around until they made sense). Phase two will consist of a kitchen renovation, currently underway. Phase three will undoubtedly involve some sort of muscle relaxer and a bottle of champagne. Check back often and see if I survive. 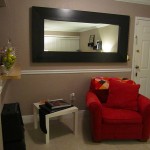 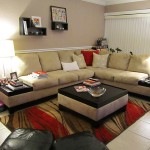 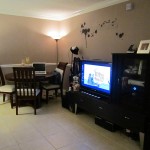