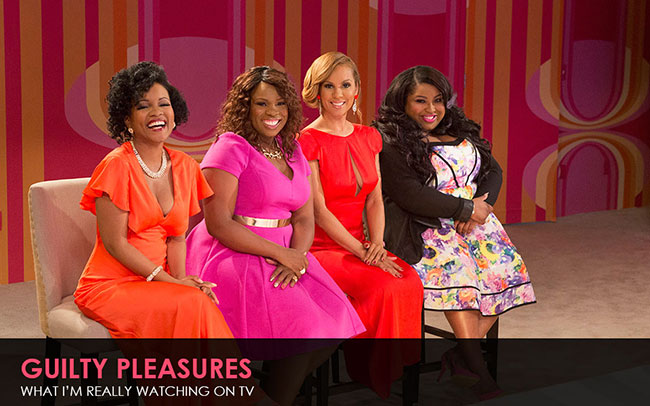 TV is a very personal thing for me. I was an only child well into my teen years, so in place of having siblings to entertain me, I had reliable, entertaining, always-on-schedule TV. It made me laugh. It taught me about the Facts of Life. It even provided the first object of my pre-teen affection (Johnny Depp on 21 Jump Street – no surprise there!). By the time I’d met my husband, I’d probably had more meaningful relationships with TV characters than I’d had with friends. I don’t know about the rest of you, but I was pretty much raised by TV (with a very hardworking Abuela in the background, of course).

This is probably why I recently realized that I’ve become quite protective of my DVR list. If friends are over, I will cringe at the thought of having to scroll through my selections to get to a show we’re all gathered to watch. Sure, I have the respectable stuff everyone is tuning into (Game of Thrones, Walking Dead, American Horror Story), but after a little recent pondering, it’s time to admit that, as easily as I’ve stayed away from Housewife-brand programming, I’ve also got a pretty bizarre selection of shows I eagerly await each week. So in an effort to bare all and come clean, here’s what I’m really watching after those respected selections wrap up.

Nashville – This is probably the closest thing I have to a novela. There are love triangles, rhinestone-studded outfits, and Hayden Panettiere as the villain you love to hate (and sometimes feel sorry for). Oh, and the singing. Yep – I got their soundtrack for Christmas last year and still listen to it more often than I care to admit.

Girlfriend Intervention – This show is filling the gap left behind by my old favorite, What Not To Wear, except that it centers around four very opinionated black women who are on a mission to fix the weekly BW (Basic Woman). They will overhaul her home, her wardrobe, and her personality. And sometimes, they will make her twerk.

Grey’s Anatomy – Grey’s has been with me for too long to let it go now. Even though they keep giving Meredith Grey new sisters. And even though they keep playing really awful covers of 90’s music a little too loudly over the dramatic conclusion at the end. I may have to cringe through every tree-removal surgery, but I’m still committed to seeing it through. That’s where I draw the line with Shonda Rhimes, though.

Comic Book Men – I know nothing about comic books. I won’t pretend I’ve ever read one, or that I really care to pick one up. But I am a big fan of Kevin Smith and most of his work, so I find it comforting to watch these guys who just love comic books put on a highly detailed show about nothing other than their childhood passion. There’s hope in that. And I’m going to cling to it and channel my inner geek goddess.

America’s Next Top Model – On some level, when I first started indulging in this show, I respected Tyra Banks for really taking her career and running with it. She created and hosted a competition show for girls who wanted to be just like her. And as superficial as anyone wanted to call it, it gave these girls some sort of hope. But then she put together a finger runway. Yeah. You read that correctly. Finger. Runway. Still, I can’t turn away. I’m still tuning in every week to see what happens there. Maybe Tyra really does know what she’s doing…

Ink Master – There are two reasons I’m watching this show: 1) The fact that Dave Navarro is hosting it still fascinates me and 2) Every time someone gets a pinup tattoo, there’s all but guaranteed to be some sort of strange deformity and I can’t help but place bets with my husband as to whether it’ll be an extra finger or a backwards foot. Admittedly, though, it has scared me off a bit to getting my next few pieces…

‘Fess up. What are you tuning into these days?