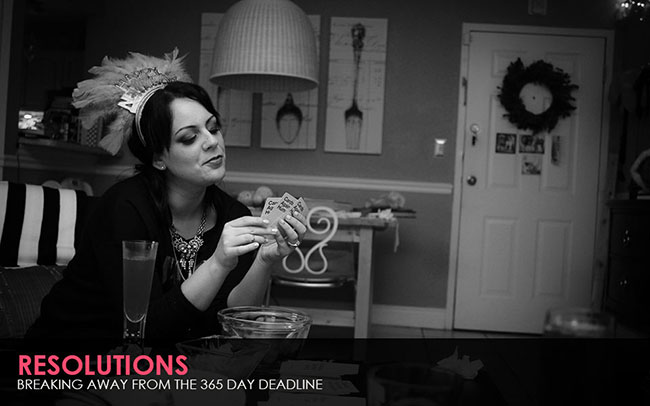 The thing about resolutions is that I’m absolutely terrible at them. I don’t really get them. I rarely make them. And when I do, chances are I’ll forget about them in less than a week. So this year, I’ve decided to make long-term goals instead. Here’s what I’m planning for 2015 and beyond.

Even as I write this, I’m feeling sluggish. I’m perched on the couch in my best sweats, feet up and shoes kicked off, while contemplating all the other things I should be doing. I could be doing yoga. I should be exercising. I ought to meditate. But the truth is, I’m still savoring that little bit of chocolate I just allowed myself to enjoy and pondering whether a half hour on the couch watching Oprah reruns in the middle of the day is an acceptable state for a self-employed, usually-motivated writer. I’ve been in this spot before. Many times, if I’m honest. But the difference is that it’s nearing the end of the first week of the new year and my level of motivation is down to zero.

Maybe it’s the lack of sleep that comes with parenting. Or perhaps the fact that trying to cram work, chores, motherhood, and more work into one day requires a stronger caffeine fix. But as I look through my Instagram feed and Facebook updates, I know I’m nowhere near as enthusiastic about this whole “new year, new you” thing everyone else seems to have figured out. The truth is, I’ve tried the resolutions thing before and have found myself either completely unmotivated to go through with them or entirely amnesiac about my detailed lists after only a day or two.

Still, that’s not to say that I’m completely devoid of any goals for personal growth. In fact, over the past year, I’ve taken strides to put them in motion. But the  365-day deadline is what stops me in my tracks every single time. A one-year expiration date just doesn’t seem to be enough time to transform myself into this stylized, optimal version of a woman who can speak three different languages, spin gracefully with new dance skills, and weighs about 20 pounds less. But maybe resolutions aren’t for everyone.

So here’s what I’m considering: I’m going to do away with this annual list of nearly-impossible life goals so that I won’t feel like an utter failure come December. Instead of drawing up this caricature who looks nothing like me and holding myself to standards no one would even care if I attained, I’m going to reach for a gradual lifestyle change to become the kind of woman maybe I’ll be glad to see in about ten years. Perhaps that’s the lazy girl’s guide to resolutions. But this is what I have in mind on a more permanent basis:

Be an active mom: I don’t think I’m ever going to be the kind of mom that puts together original Pinterest posts on how I’m making fairy water for my daughter. If you’re that kind of mom, God bless you and your Supermom powers. But I’m not her. Still, I hope to continue to be an active mom and be involved in Lucy’s life, making her childhood memorable and her adolescence as painless as possible. Maybe when she comes out the other side of growing up, she won’t resent me as much.

Be healthy: Whether it’s physically, mentally, or spiritually, I hope to continue exploring what this means and how to incorporate it into a daily practice. For now, I’ve found that meditation, yoga, and long walks are working. But they’re not daily and they’re certainly not enough. More than anything, I’m hoping to set a better example for Lucy of what healthy looks like.

Forgive someone: This has been a struggle because I used to think that forgiveness meant being OK with what the other person had done. But I now get that it’s really about letting go of that anger and resentment, not for the other person but for myself. Living with a grudge might as well be  a daily ingestion of poison. So it’s time to let go and move on.

Judge less: For myself, I hope to be less critical and try to keep that inner voice a little more encouraging than the automatic Cuban scolding that goes off at the slightest misstep. For others, I hope to show more empathy and compassion. That may lead to forgiving a little more easily.

Believe more: I often hear that the people who succeed aren’t necessarily the ones who know the most or have the most talent, but the ones who truly believe they can. Here’s to believing enough in my talents to be able to explore more opportunities.

Stop assuming the worst: Maybe this defense mechanism comes as a result of growing up in Miami and being automatically suspicious of everyone and everything until otherwise has been proven. And I’m certainly not implying that I hope to become a pushover. But I do intend to try to see the better side of things along with the unwanted possibility.

Keep learning: New languages, new photography skills, new makeup talents. Whatever the case, I’ve always given up too soon because I somehow convince myself I’m too old for it anyway. This is nonsense. Here’s to finally finishing that French lesson in the next two-to-five years (ish).

Maybe this is too lax for most and nonsensical to many. But my goal is to keep growing, keep getting better, and keep feeling OK about it whether it’s completed in one year or a little more than that. So here’s to trying to be a little better every day for a long time. Cheers to 2015. And then some.