‘Tis the Season! I found this great chart on A Cup of Jo, one of my favorite blogs, and a fantastic and enlightening related article on Grub Street New York. Here’s to hoping everyone has a fun holiday season that doesn’t end up with your dancing on the boss’ desk (unless he/she likes that sort of thing)! 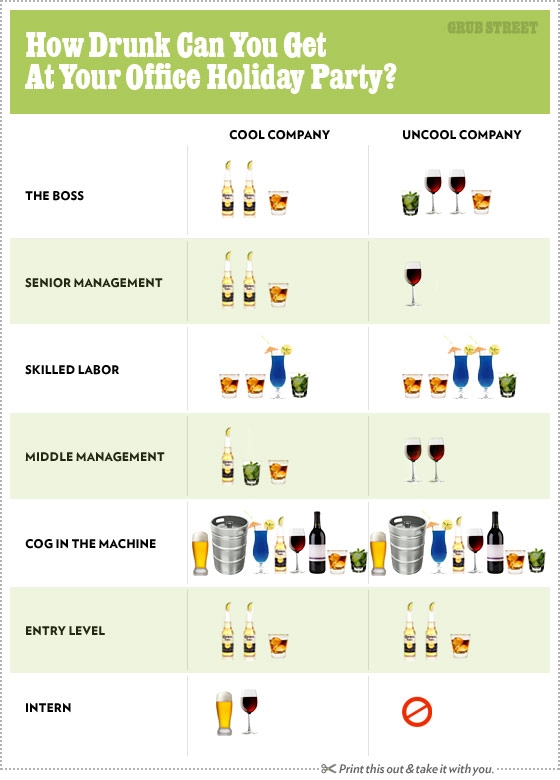 Some signs you probably work for a cool company:
• You have been hung-over at work and acknowledged it to your immediate supervisor, only to have her/him respond with empathy.
• There is a pool table at the office.
• You have been skydiving/surfing/to a shooting range with at least some of your co-workers.
• Unique facial hair choices are not discouraged.
• Your holiday party is held at a loft, and people who don’t work for your company try to crash it.
• You often see beer in the office fridge and/or cocaine in the office bathroom, or vice versa.

Some signs you probably don’t work for a cool company:
• You had to take a drug test before you were hired.
• The company has a dress code, which is written down.
• The dress code is so antiquated that it still contains a “casual Friday” section.
• The holiday party is held in the office conference room, in the afternoon, and people try to leave early to beat traffic.
• Your co-workers label their cartons of milk in the office fridge.
• Not one single person has a Mad Men-style minibar in his or her office.

Obviously, the cooler the company is, the more likely it is that one of your co-workers will end up wearing his tie like a headband at some point during the party, meaning it won’t look so bad when you get up on the bar and start signing “Dancing Queen” alongside him.