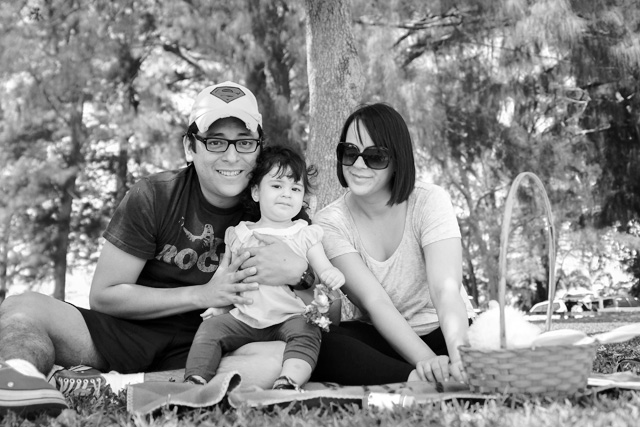 I celebrated my 34th birthday this weekend. A year ago, I was becoming a mom for the first time, something I thought would never happen. Not because I didn’t think I could handle it. But more because I didn’t think it was my “thing.” I was never the little girl pushing a baby stroller with her dolly in it. And I never went gaga for kids the way my friends did. When I hit my twenties and realized I didn’t coo at every passing infant the way other mommy-hopefuls did, I figured that wasn’t my path and I was OK with that. Combined with my hopes for a successful career, a love of tattoos, incurable wanderlust, and a mouth that curses a little too often, I was hardly anything close to the definition of motherhood. But then I met Lucy.

Lucy was born four days after my 33rd birthday. I became pregnant with her at the age of 32 after having suffered an early miscarriage two months prior, following some prodding from my doctor who’d said if I ever wanted to have a family, now would be the time to start trying – and fast. While many women go on to have healthy children well into their forties, certain medical conditions (fibroids, mostly) were presenting what the Ob/Gyn deemed concerning enough to propel me into prompt action.

The very real possibility of not having the chance to even try for a baby jarred something in me that shook me to tears in the hospital parking lot outside his office. I called my husband, sobbed as I tried to form sentences, and somehow relayed the situation. In his usual style, he remained calm, told me there was nothing to worry about and promised we’d be OK. And, as is often the case, he was right. We may have suffered the loss of an early term pregnancy throughout our journey, but the fact that we could even get pregnant brought overwhelming relief to me, the woman who used to nearly break out in hives at the sight of a baby retailer (not even joking).

One year later, and one daughter richer, Lucy has given me clarity and perspective in a way I never expected. I am certainly not an expert mom, nor did I expect to be. But I’m doing the best that I can, which I’ve realized is the only thing I can do. But I think she’s happy. And she’s made us want to be the kind of people she can look up to. And as I round out this year full of changes, progress, and life lessons, I’m grateful that I’m here, as her mom, working on becoming my own definition of that.

It took me a year of taking care of someone else to learn some things I probably should have learned a while ago. But, some of us learn a little differently than others. So I’m sharing this list in case you’re like me – a little stubborn on the road to enlightenment.

I still don’t coo at passing babies, though I am admittedly a little friendlier when I pass that kids’ store. I have decided that I want to continue pursuing my career because, even though I’d sacrifice anything for Lucy, I also know she will benefit from having a happy, fulfilled mom. I continue to enjoy having tattoos and don’t intend to stop getting them. And my husband and I make time for weekly date nights, spend plenty of time alone, travel regularly, and pursue outside hobbies and creative outlets. We plan to teach Lucy about tolerance and the importance of living with empathy and an open mind. And while that’s not likely a traditional definition of parenthood by my family’s very conservative beliefs, the past year has taught me that, overall, defining your own path is the ultimate gift we have in this life. And it’s something I hope to continue to teach my daughter in the years we have together.