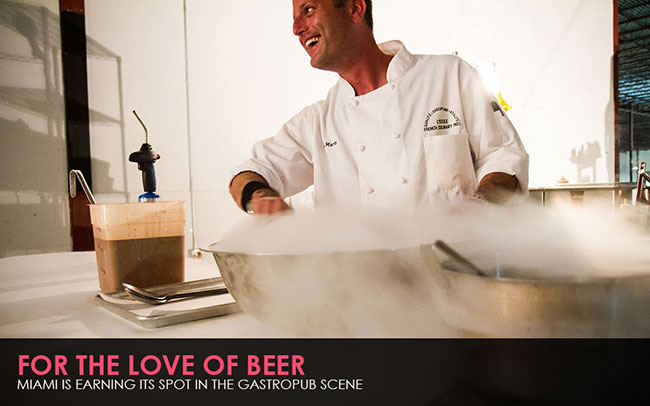 One of the greatest things going on in Miami lately is the burgeoning food and beer scene. It’s not a trend. It’s not a gimmick. What feels like an overdue movement for those of us who have grown up here has finally come to pass – we’re moving forward. We’re creating a scene. And that scene is here to stay, making quality craft beer and exciting gourmet the new standard around this city.

Take, for example, The Mighty, or 180° @ the DRB, both of which are serious about their gastropub titles and holding strong to making that something they earn, not just a term trendily embossed on the front door. The chef and owner of the latter, Ryan Martin, recently let me interview him about these very topics (which you can read here). And his message is clear: Good food and beer have to come from the heart; there has to be an honesty about it. And, though honesty may not necessarily be the term you’d think to associate with Miami, maybe there’s a part of the city that’s ready for a change.

But, words are wind, as they say. So my suggestion is to try these places and see what they have to say, and whether they feel authentic to you in a city that’s known for its superficial nature. Being a native, it was refreshing for me to finally see this kind of genuine effort start to take over and set down roots in this otherwise transient city. But I know for anyone in Miami, the proof is in the product. So, to experience this food & beer scene for yourself, check out the upcoming beer pairing dinner at 180° @ the DRB, going on Wednesday, February 4th. Get your tickets here to attend a six course meal prepared by Chef Ryan paired with beer from Boulevard Brewing Co. Then let me know what you think.

Thoughts on these places and the foodie scene taking shape in Miami? I’d love to hear your opinion. Am I being naive? Or are we finally seeing a genuine effort?