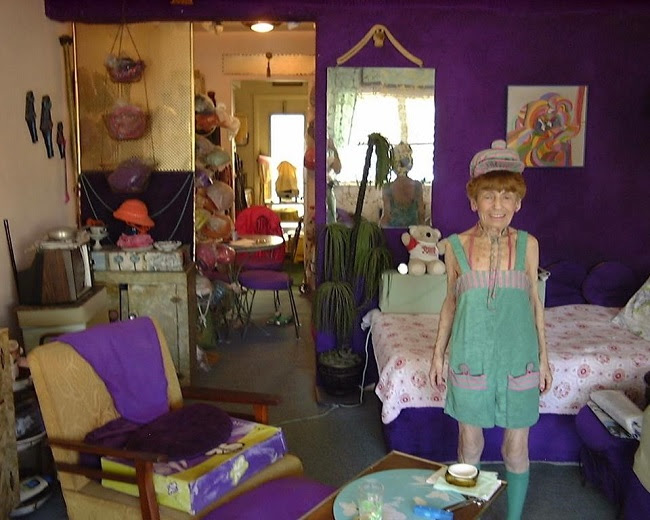 Spend just a few minutes in Miami and you’re well aware that there’s no shortage of color in the spectrum of our characters. Our locals, whether born-and-bred or transplants, are not afraid to make a statement. So was the legacy of Irene Williams. Anyone who grew up in Miami knows the ’80’s and ’90’s were an eccentric time for our city. Now, in a pop-up show that aims to celebrate what would have been her 100th birthday, If These Hats Could Tawk is bringing that colorful eccentricity to the forefront.

Irene Williams was dubbed the “Queen of Lincoln Road” because she walked back and forth every day from one end of the pedestrian mall (where she lived) to the other end (where her stenographer’s office was located) for over 40 years from the 1960s until 2001 (she passed in 2004). In the late 1960s, Orson Welles hired her stenography services while he was in town (Irene often referred to herself as “a call girl with a typewriter”).

Irene created her outsider couture from unconventional materials such as fake-fur toilet seat covers, bath mats, and towels. She made a fashion statement every day of her life on the streets of South Beach, decked out in her own creations, including more than 100 handmade hats and carefully coordinated ensembles.

She delighted locals, tourists, and even some celebrities. During the early 1990s, Gianni Versace once stopped Irene to compliment her on the looks she created. In 1994, Irene was befriended by Eric Smith, a New York designer who would eventually capture her on film in his award-winning documentary, Irene Williams: Queen of Lincoln Road.

Remembered fondly for her vivid fashion, Irene Williams captured the eye of visitors and locals alike. Annie Leibovitz asked her to pose for her camera in 2000, and she did but only after insisting the photographer pay her daily stenographer rate. Irene wore a blue and green outfit she’d constructed out of vintage Pierre Cardine towels she’d been gifted by designer and friend Eric Smith.

Irene’s centennial will be celebrated with an exhibit displaying her colorful collection of handmade hats and memorabilia, donated to the museum by Eric Smith. “This summer pop-up show honors the individualism and character of the personalities that define South Beach’s enduring spirit and tenacity,” said Nancy Doyle Cohen, the Membership and Programming Director for the Jewish Museum of Florida-FIU

“If These Hats Could Tawk” opens July 13 at the Jewish Museum of Florida-FIU.